Anyone reading the title would expect a clash, two sides who are upset and on the edge of eruption, a “tension has been high” kind of feeling on the streets. But no – you are reading this the wrong way, what this actually means is “Muslims in France are Increasing their anti Jewish Activities”, that is actually what the title means.

It seems that France (and Belgium) Muslim communities have stepped up their active and physical level of violence towards the Jewish population of those countries, one would expect just the opposite to happen as Muslims are now widely blamed for the massacre that took place in Toulouse a week ago, but as it happens this religion does not follow normal and decent rules.

So “Emotions have been raw in France” means that Muslims are now, somehow, even more aggravated than before by the mere existence of Jews in France and Belgium, even though the Jewish communities have been there hundreds of years before the waves of Muslim immigration to the continent. Jews have been hit with emotions, however these are more of fear and terror, and the response to those fears is simply to take cover and hope for the best. Muslims however, awaken to frenzy activity by the slaughter of 7 years old girl, and two younger boys, somehow take offense at the Jews, and now physically go after them.

Since this is clearly a war of religions, with all perpetrators being Islam’s followers and all victims clearly identified as Jewish, held on a predominantly Christian ground one would look up to the religious majority opinion – namely the Christian church response to these attacks, and the Vatican did express outrage over the Toulouse killings, and we can all but wait and see what the future holds – since Muslims are not only committed to killing Jews but other types of infidels as well.

If there is one thing that would remind in mind from the massacre in Toulouse, France is that an able bodied man of 26 years had, at a certain moment, put all his energy and power, focus and ability, on one point – he was chasing a little 7 year old girl. When he caught her, this 26 year old man executed that 7 year old girl by grabbing her by the hair and putting a bullet to her head. He also killed an unarmed and unprepared (for battle) man and his two little children.

After that he went to play some soccer in his neighborhood as if he had just finished reading a book.

The killer from Toulouse had no such doubts, French soldiers had to be killed for participating in a war on Muslim soil, no matter if they were right or wrong, honorable and peace loving while doing so – the holy book, as dictated by an angle of god to a prophet, clearly states that the punishment for waging war on Muslims is death. Little children near a Jewish school means that they are Jewish and by the holy book should be killed – at any age, at any time, in any way possible.

Even with the tremendous agony that any normal person should feel about the delineate destruction of lives, especially of young children that had not had the chance of doing any wrong to anyone, it is the French soldiers death that sends the real message here; even if your heritage is Islamic, once you conform with the infidels you will be persecuted by (some) other Muslims.

The Palestinian prime minister go on to say that he does not like the fact that those killings were done in the name of the Palestinian cause, however he forgets to note that the Palestinian cause if repeatedly voiced in Islamic prayer houses, every Friday. And when we say that they talk of Palestinian causes we actually mean that the narrative is that Jews are slaughtering Muslim children, contrary to facts and the truth but holding a very firm ground for many years now the whole regional dispute in Israel is characterized by religious Muslims as a Jewish army/state massacring Muslim children – so why be surprised? 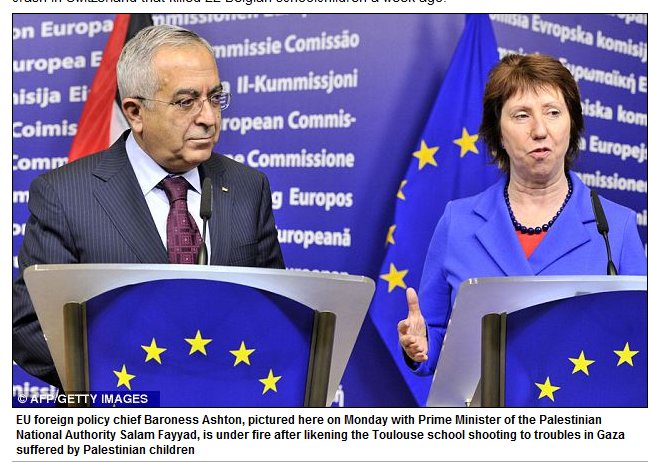 If there is one thing that the terrible acts of the Norway 2011 killing teach us is to wait a little to see who is really behind some of the worst acts humans are capable of. And comparing between Norway Oslo 2011 and France Toulouse 2012 was indeed something that was called for until the early morning hours of today, when it was clearly established that it is a Muslim group behind the killings in the Jewish school in that French city.

It is sometimes a cause of great wonder to us how the far right and religious fanatics seem identical in their purpose and their objectives, so much alike that both can be equally suspected of the same crime.

But lets talk about the main thing today, the response of EU foreign minister Baroness Ashton to the Toulouse killings, which obviously places her neatly in the Islamic radical corner of the world of politics. For some reason Ashton can not keep a fair distance between intention and result, this inability – or better phrased – unwillingness to distinguish  these two is the Western leftist main hobby in the last 10 years.

For Ashton if Israeli planes try to hit a terrorist who is, at that moment, engaged in activity that is dedicated to killing innocent non combatants in Israel, and in the attempt to destroy this person those Israeli war planes hit children who are playing in the next room (mainly because Palatinian terrorists engage in war only when they are nestled within the general population – with a preference to kindergartens) those Israeli planes are responsible for the killing of those children.

The measure of responsibility can be discussed, however the intention was never there, those planes did not lift off with orders to destroy young lives but with the orders to protect the innocent civilians of Israel who are under rocket and missile attacks. On many occasions that government of Israel publicly apologized for the damage caused to non combatants, however that does not change Ashtons opinion on it – for her it was as if the Israeli government assembled to declare war on a bunch of Palestinian children.

The fact is that no one in Israel, not in the political system and not in the religious authority has ever called for the destruction of Muslims, young or old, and there is a constant apologetic tone regarding deaths of non combatants from Israel for years, in direct contrast to the hysteric cries of massacre and murder for the sake of god that comes from every corner of the Arab and Palestinian world. For many Muslims do believe that Jews need to be killed – without going into details such as age or gender – just slaughter Jews and God will be happy.

So the poisoned mind of EU foreign minister Baroness Ashton leads her to the same reasoning as of a terrorist, if Israeli soldiers show up all geared up and ready to massacre Palastinian children why wouldn’t an armed young men drive over to a Jewish school and shot everyone down as a revenge – since these are basically the same thing?

It is not only EU foreign minister Baroness Ashton who is to blame for a mindset that is not only completely false, it also falls on the French media who does not resist the lie filled propaganda of religious war waged by Muslims against the state of Israel, and who are constantly connecting the unfortunate death of non combatants Muslims (because they do not do this for Jews) to a sort of Israeli purpose and goal.