This is one video that does not need to have much text attached to it, but the bottom line here is that in all religions it seems that there is no agreement on the way and the exact version followers should practice, and yet it is surprising to some to discover that “holy” men come to blows every now and again when it comes to confrontation with opposing “holy” men.

The reason of the fight here is irrelevant, simply because it just comes to show that Christian monks are not united in their belief, but rather devoted to the promotion of the particular version of Christianity they subscribe to, and will attack their own brothers in religion when push comes to shove.

Just so it does not seem like we are after Christians here, one should bare in mind that Jews and Muslims also have relatively large branches of faith that are very different and sometimes clash in a violent and bloody argument, especially when “holy” days are close.

Enjoy this short video from that magical place called Bethlehem

It looks like the head of the Catholic Church does advance with time, here he is using a tablet computer to set a mountain alight with the Christmas spirit. It is a shame that the same people find it so hard to do the same when this comes to sex and condoms, because just moving the bar a little and saying that condoms can save people from AIDS will start healing millions on Africans who simply do not know any better.

If you can use iPads you could probably also tell the world that condoms are just great, and allow Africa to start preventing AIDS from killing so many of its people, do this good grace this christmas.

The news today tell the story of the Palestinian authority agenda at UNESCO, mainly of having Bethlehem registered as a “Palestinian heritage site”, this is done to politically gain some points against Israel and promote the participation of the PA into the UN as a member state.

The trouble with this request is the poor treatment the Palestinians give Christians and their sites, something that does not appear much on the news and that is probably considered less sexy is the fact that Christians numbers in the PA have been diminishing very quick, from making 30% of the total population 30-40 years ago to under 9% today (check out this link to learn more). Although there are no official interviews with people planning why the leave their homes it is safe to assume it is the Muslim pressure targeting Christians. And so the town of Bethlehem is today overwhelming Muslim, and is expected to be 99% Muslim in a few years. 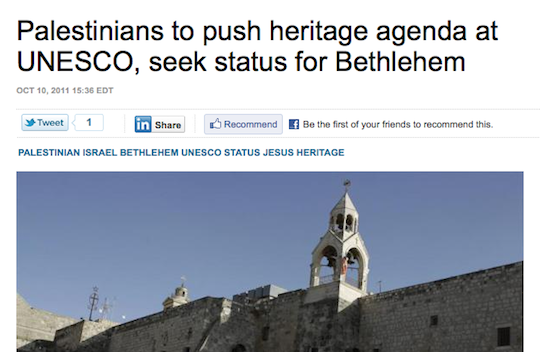 Don’t get your hopes high, however it does look like a group of rape victims by the hands of clerics in the Catholic church decided to go against the Vatican and try to persecute the institution for its share of responsibility for the crimes as well as the cover ups that usually follow all these cases.

The head of the church is probably what they target, but its hard to believe that the court will go after the pope, the court might actually drop the case altogether because of its more defined work against war crimes and more serious international crimes, however one must remember that this court is also the one to put crimes against humanity on the spot and that the continuous rape of young boys in catholic church reports have been like a epidemic in the last decade or so.

So will try or will they not go after the Vatican or the Pope? if this receives enough attention it will not need to because the main point here it to point the finger at the people who are in charge of those sexual criminals, even if they did not know a thing about it, it still does not mean they can  get away with it.

Many people forget that priests are under the control of the church, and that it is the church institutions that clerics and priests arrive from, it is the responsibility of the church to qualify only those who are fit and who have shown themselves to be worthy or a congregations trust, and even though it might sound like amplifying the cause, the Vatican is ultimately the one to answer the main questions of how these people ever got to be around young kids and why in many cases the church tried to cover it up.