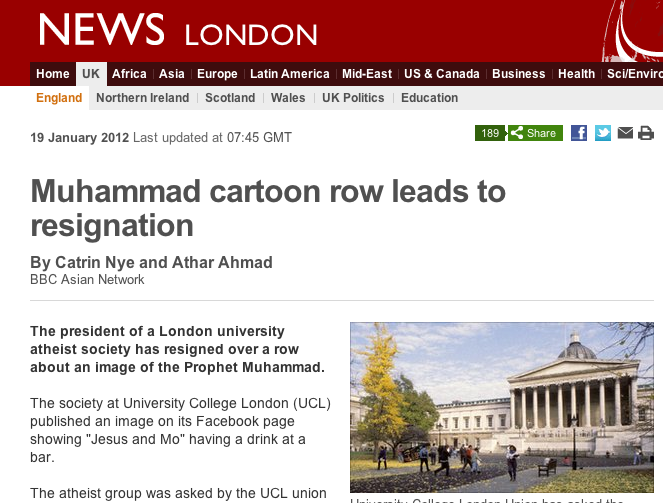 They say the present is now, and its a gift, not much so for London’s University College London, the gem of the city’s universities, which has been the first English university to open its gates to everyone, without difference to religion, race or gender.

This university had Jeremy Bentham as one of its founders and conceptual fathers, and is currently ranked #20 world wide, #3 in Europe. It had produced over 20 nobel prize winners over the years.

And now it seems that this proud secular university is faced with a small crisis, one that has been practiced in the world a couple of times already and seems to be a very successful way of venting anger at secular and Western society.

The UCL atheist group had published a small cartoon in the university paper, it shows “Jesus and Mo” enjoying a drink at the local pub (anyone who goes to the university in the UK knows that this is as routine as writing papers), however this gave those who frantically love their religion that they can not keep from being offended in its name over and over again, a great chance to vent some anger.

And so once again we hear of how some are deeply offended by a picture, published in a paper that no one is forcing anyone to read, and that the mere knowledge that inside the pages of a paper there is an drawing of an idea that pictures someone who walked around the desert believing he has a direct line to god which no one else can hear, that knowledge is something that they can not bare.

It is of great shame to the city of London that instead of walking forward the focus needs to be on the delicate feelings of those who are constantly offended by the West and secular way of life, and not on real progress, especially when those who are so easily hurt by drawings remain stoic when viewing real photos of decapitated people.