This is just another page in the long book of this insane world, while in Syria owning an iPhone could get you into serious trouble (like life threatening trouble) in Chicago saying that there is no Santa on a news television channel could cause a lot of troubles by itself.

Would it make sense to you if a fighter pilot would say he refuses to fly over Chicago from the 20th of December each year because he is afraid to crash into Santa with his F16 fighter jet?, what would you think of a coworker who turns down an invitation to go out to do dinner with friends because he wants to sit and wait till Santa falls through the chimney with his gifts?

Seriously, why even get into that, there is not even a tight religious connection between Santa and Christianity, just check out the Catholic tradition of Saint Nicholas who does the same exact thing as Santa but on a different days (and also looks pretty different too). So believing in Santa does not make you religious, it makes you childish and immature, like believing that the moon is made out of cheese.

News anchor Robin Robinson of Fox News Chicago made the mistake of connection the dots and telling it as it is, Santa is used as a commercial Viagra and as a marketing tool to boost sales and make kids believe that they can get anything they want from their parents, which is not so great, especially when you consider the financial meltdowns of the previous months. 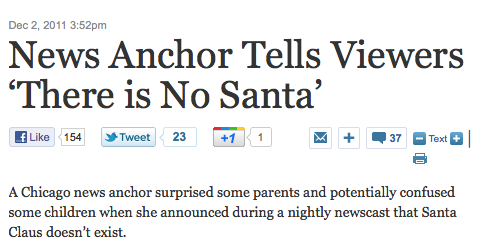