How lucky do you, the reader, consider yourself, using the internet and reading this blog post off a computer screen, hopefully reading in peace. The truth is that we in the West are pretty lucky, when compared to some parts of the world, there are a lot of places in state of war, chaos and trouble, but not many seem to be in the poor shape Egypt is turning out to be.

A mother and her seven children found themselves in the Egyptian prison for 15 years for (wait for it) converting back to Christianity, it seems that the mother was a Christian to begin with and converted to support her marriage to a Muslim man, when the husband passed away she wanted to go back to Christianity (just a thought… if it was so easy for her to drop Islam how did she not just drop out of religion altogether… one can not stop being atheist in this place) but when the authorities found out about it they simply did not accept that – converting to Christianity is not so simple in 2013 Egypt.

In fact converting to anything but Islam is not so simple in Egypt, it is just Islam, that is what this country is turning out to be in a worrying rate, a fundamentalist state with totalitarian aspirations, taking hostage the population of the country, their minds and hearts as they go – raping the entire population into a forced religious system. Orwell was never as close as now to a ministry of thoughts, where one needs to confess his or hers deepest beliefs and suffer for it.

The crowds in Tahrir square could not wait any longer, they wondered why it has been delayed so many times and why it took so long to declare the winner of the elections, the army simply tried to buy time and think things over before it gives up its powers to a man that represents a party which will probably never surrender its powers without a bloody fight.

In this end Egypt is the first country to establish a Muslim brotherhood state, one that is governed with the harsh guidelines of religion and nothing else, one that will minimize its peaceful commitments to Israel or move one inch further and go into open hostility against it. This country is now fast headed into the forming of Sharia law, meaning further chaos and misery to its millions of Christian copts and secular population.

The nightmare has now turned full circle, the former president Mubarak is in bed, brain dead, he too must feel the amazement of many, to see the party of god, who served as an active past of the assassination of the president before Mubarak and has been a unlawful and violent group ever since it was formed is now controlling the country.

As the situation in Syria quickly develops into a Sunni Al Queda struggle against the Sh’ia Bashar Al-Assad it is only a question of time until the Muslim brotherhood will present itself as the natural leader of the Syrian majority and the new political wing of Al-Queda, in the long fight to establish the new caliphate.

All those non religious Egyptians who so bravely participated in the “revolution” now feel the heat of the African summer, soon they will be persecuted and charged, with utter disregard to their part in the play, for the parties of god are now holding the keys, and they will not give it back any time soon.

Mamdouh Ismail, an Egyptian member of the parliament had a difficult moment at work recently, he realized that once again the discussions in the house of Egypt’s politics were running late and that he might miss his noon prayer, he decided to call upon all believers to go and pray, because who needs to run a country when god is sitting and waiting for his loyal subjects to once again through themselves at his feet?

Surprisingly this met the anger of other members of the parliament, first for disturbing the issue (the riots of the soccer game of last month, who cost the lives of many people and outraged most of the population of the country) but it was not only for the mere disturbance that the caller faced objections, many thought that this was in fact a challenge to the other members of parliament to go and pray, a mild suggestion by the caller that they are not as religious as he is.

The outrage was caused mainly by this, and not by the fact that these people are in charge of a country which is, for the last year, in a constant state of chaos and civil unrest. It does not look like the Islamic god (or any other god) is trying to help Egypt out of the poor state it is in, and nevertheless some people think it is a good idea to suspend political discussion in prayer to an unresponsive god. 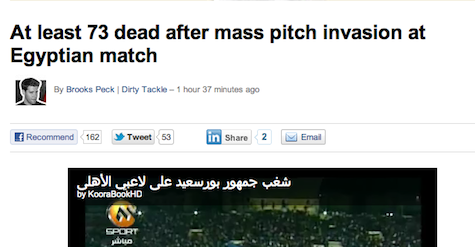 Here comes a little video along with some scary text, aperently this is the footage of the last moments of a soccer game, in the end the fans of the home team rush to the field to try and massacre the players, which they might have actually done.

This might be the example as to what Egypt is becoming, a bloody disorganized riot, with all sides screams the God is great and on their side, even if it is just a sport event. This might be also some food for thought when talking about how the Muslim behave towards Coptic Christians in Egypt today, with this level of violence on the streets the country is not header towards peace.

Like in the good old days this riot just started with a rumor, some Christian had posed with a nude Muslim woman, they say, and that is just about enough to trigger thousands of Gods faithful believers to loot and set fire to shops of another faith, damage property and of course try to go for even yet more damage and get some blood on the floor, because a good old scapegoat can not go un-noticed in todays post revolution Egypt.

The state of affairs for the Coptic Church in Egypt is quickly moving from the occasionally lethal to the seriously dangerous, you got to admire the courage of the ones staying in this country, and hope for a better life for the many who fled to the U.S. as a part of a very silenced transfer of a population out of a country in which they have now become living targets.

One can not but wonder how those who initiated this “revolution” a year ago, many of whom are secular, feel about the changing winds, to see this country and its revolution highjacked but religious fanatics who want to violently forever change the face of Egypt, and to think that the Western world stood and cheered these people…