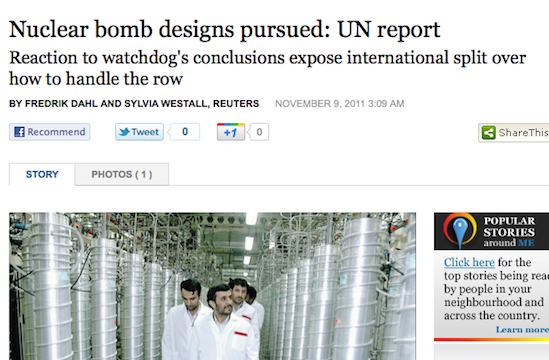 Though many in this West do not want to see any new war on the horizon (energy costs, stock markets and failing economies are the main and only reasons, not human suffering and death) a confrontation is becoming a real possibility these days. It has been years since the Iranian nuclear effort has been in the global public eye, the statements made by Iranians in reference to their plans were very aggressive and promised anyone who will try to stop them much harm, they were (and still are) very happy to reference Israel as one of those who will want to stop them as many times as possible.

And so we learned that the head of army in Iran, as well as almost any cabinet minister there (including the president of course) believes that Israel will be wiped out of the map eventually, and to add a “catch 22” theme to the whole thing that Iranians also promised the Israelis to destroy their country if they will try and stop the Iranian nuclear program, basically meaning you are dead if you do and you are dead if you don’t, pretty clever.

Now, with the last report on Iran’s nuclear program being published it looks like we are very quickly heading into a physical confrontation between the two countries, as the West looks on and does nothing. Of course Washington has something to do with it, the failed system of punishments on Iran has not done anything to decrease its will or ability to get Nuclear capability, because when you got the Russians and Chinese in your market the U.S. does not seem to make a strong impression.

This next war will not be about money or natural resources, it will be a religious war, a war driven and delivered in the name of god, between Islam on one side and Judaism/Christianity on the other side but also within Islam, between the Shiite Iran to its Muslim Sunni countries.

In this probable scenario Israel will try and strike Iran’s nuclear facilities, in it own defense, since many Iranian officials have promised to destroy Israel over the years, however Israel is not fighting any holy war here, its just trying to survive a lethal development. Israel’s next war is anything but a religious war, its 1.5 million Muslim citizens and many other ethnic minorities, the damage will not sort out religious and believers when it strikes, and almost any nuclear device activation in any part of this small country will inflict damage on many different faiths, which is much more than you can say about the helpless people of Iran who are shoved into this conflicted by religious mad leaders.