We have been following the hopeful struggle of the people of Egypt for real freedom, democracy and better life, but it sadly seems like this is turning into yet another form of tyranny and lack of any of the traits of democracy. There were early signs of religious parties highkacking the revolution from the people and its true leaders (as we reported on Egypt revolution turns religious about a month and a half ago), but now it looks like this kind of religious leadership is actively taking the streets on force, and the police/army are not stepping in to stop it.

The worst thing is that some of the people who actually moved the revolution are now being opperssed by the religious parties, atheists are being pushed aside and discredited, erased from the pages of history, and women are told not to expect any change in their personal freedoms or situations, this revolution is no longer for them.

I’m not going to quote the whole artilce, go check out Mellisa Bell’s piece on the Washington Post 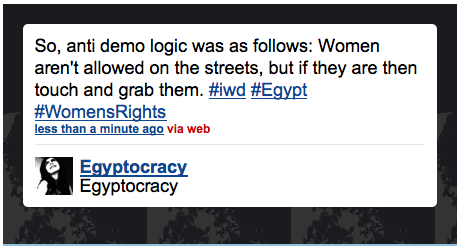