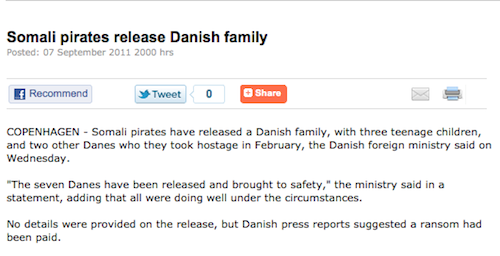 Just saw the news, it looks like the Danish family of 7 that has been held prisoners from February this year have finally been released, not because of a surprising humanistic revelation the Somali pirates had but rather because a huge ransom (estimated at $3,000,000) has been paid.

This sad story of Somali pirates abusing westerners at free will is not new, however the even sadder reality of constant submission to the pirates and their highjacking culture, supported by the law of Islam, in which any non Muslim can be taken as slave at any time, and for any reason.

Until we get a modern day version Thomas Jefferson to go out and wipe these thugs out of the water (and land) anyone taking the sea anywhere close to Somalia should be a little anxious, unless they are Muslims of course.