An 11 years old girl is about to receive sentence for her serious crime of walking down the street with a basket containing a couple of burned papers, sounds peculiar? not if the street you happen to be walking in is located in Pakistan and not if the papers happen to be pages out of the koran. Is this such a capital offense?, well, a thousand years ago it was, when Islam was fighting its way to the religious mainstream, and made sure that no one could disrespect its holy book. Did we mention that the 11 year old girl is a Christian, who happen to live in a Christian neighborhood of Islamabad?.

Jewish and Christian believes also hold the “holy” books as something sacred, however you will be hard pressed to find anything even remotely close to this piece of news from both religions in the last couple of hundreds of years.

What is really going on in Pakistan? well, no one can say for sure, but the trend seems to be that nothing but Islam is accepted, and what traditionally follows is that only the exclusive local interpretation of Islam will be left in this country. Hindus are already leaving Pakistan by the thousands, because they can not deal with the constant harassment and the actual – real danger to their lives in this country. Christians, obviously, have been targeted as well, in this war of local Islam to simply rid the country of any other religions, and anyone who does not follow Islam.

Pakistan was once a well established country, with respect for democracy and enough power to cause a major problem in the world, now turns quickly into a radical Islamist country in which time is turned back and the population is held hostage to stone age beliefs, the falling apart partnership with the US is clearly at its final stage, and from the moment that this country starts to get what it wants – which is clearly segregation of religion and radicalization of its political systems, we will have to deal with a new extreme force in the world under the chains of religion. 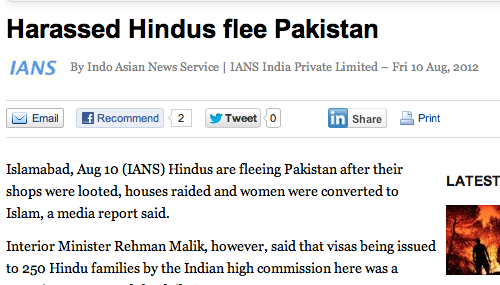