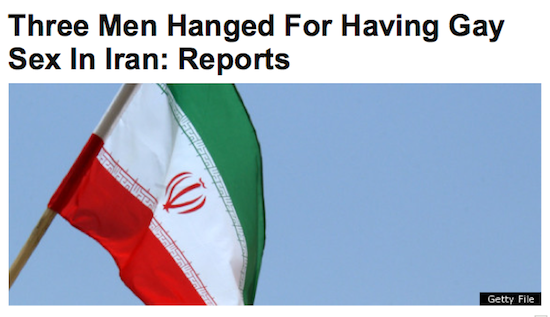 Not the first time that the Iranians have executed gays, and sadly not the last time, this is what expects all of us if Islam will have its way in the world. Any gay activity can be punished by death, the poor men and women who have just been born with this sexual tendency can beg all they want, Iran wants to see them dead, as well as other groups who had the misfortune of being born to a certain religion.

Check out this link with the story about Iran hanging 3 men for gay sex, at least they report it which seems difficult since there is no such thing as being gay for the Iranian president, he was proud to say so when he talked to an American audience in the U.S.A. (watch the video and you will hear people laugh when he tells them there are no homosexuals in his country, they actually laugh)