Now that the elections in Egypt are over, we can look back at the symbol of the popular uprising that started that whole Arab Spring thing, Tahrir Square. While there are probably many who have fond memories of the place, a couple of women have very bad ones, starting with Lara Logan that was nearly murdered at the same place as people were celebrating the departure of the former president of Egypt.

This country is so big and its population so massive that the square in Cairo is a microcosms of it, and while some crazy fanatics try to rape and butcher a woman in one corner others celebrate what they think is the the beginning of democracy in the country. However now we see that Egypt is much closer to the raping and murdering corner than it is to a democracy and equality, not to say that all Egyptians behave like this towards women but there is a clear problem here.

So it was of no surprise that French journalist Caroline Sinz was attacked in the same way Logan was, and nearly killed on the same spot. The only conclusion Western media had to draw from this was that the current ambiance in Egypt is not one that would accept a woman in any role, and that right now it is best to be a Muslim man in this country, well played.

Blogger Aliaa Magda El Mahdy saw this coming a mile away, and protested before she could be placed in prison for all kind of religious accusations, but she did not anticipate the reaction of the crowds to her actions, very much like everyone else she thought that the radicalism is concentrated in the heart of the religious establishment, but she faced a different reality when confronted with supporters of those religious forces in Tahrir Square, where she was beaten by an angry crowd and made to leave for fear of her life.

As we wait to see how the struggle of forces in Egypt begins, with religious parties winning 65% of the votes (we got to wonder how many women voters participated in this election) it looks like the country is heading into a full blown Sharia law state, however the country faces such difficulties that it would not matter much if the ruling party would have been secular or religious, its of vital importance that someone starts making solid decisions in Egypt. 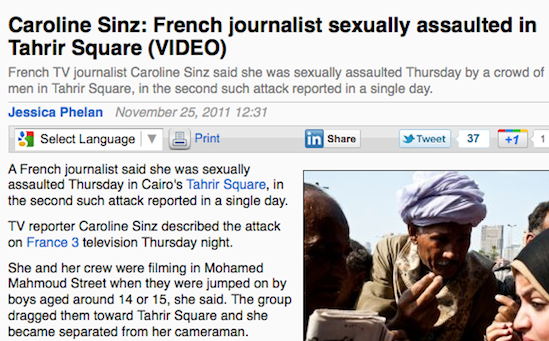