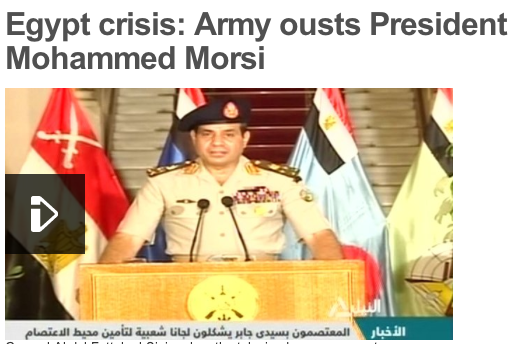 Oh, sure you can.

For lack of time, this post is presented in a form of “bunch of questions” that very naturally rise from the events of the past 48 hours, all are probably good titles for further posts on the subject of democracy, free speech, the unbelievable defeat the current American administration in its Mid-East foreign policy, and on top of everything is the Muslim brotherhood’s future.

When an army removes an elected prime minister/president can it ever be called a service to democracy? (lets answer this one with a clear “no!”, it has nothing to do with democracy or any kind of liberal thinking, it is a pure violent action that is contrary to any democratic idea).

Free speech – did the protest in the last couple of days bring about the removal of the Egyptian officials, was that a pure form of free speech that overtook the whole country?. Of course it was free speech and it was exercised to perfection, however one must wonder how this lighting fast mini revolution came to be, how could it be that it took under 100 hours to remove a party that won an election just a year ago by an overwhelming majority of the population.

The American failure – President Obama has another fantastic disaster under his belt now, his lack of intervention on Syria, his paralyzation in dealing with the “Arab spring” when it happened are now ballooning into a huge problem. The never ending mistakes with almost all the middle east countries has led to a rapid decline in the how the U.S. is perceived today. Even the loudest warnings from Washington are ignored by the people of the Middle East.

The people of Egypt did not revolt against the Muslim brotherhood because it was bad at politics, but because it failed the most basic elements of any administration – it did not get the population enough food, enough work, enough safety.

The Muslim brotherhood – after decades of waiting, not always quietly, for power, the brotherhood now lost it in a few hours, publicly humiliated and stripped of power it is indeed a surprise that this thing happened without much blood filling the streets of Egypt, however the backlash might still arrive, what is worst is that the followers of the party have a genuine claim, they were removed by force by the army.