There is nothing new in the middle east. Two days before Turkey’s prime minister visit to Egypt, the Muslim brotherhood welcomes him with open hands, joining in on the attack on Israel. The situation in both these countries (Turkey and Egypt) might seem very different, but they are actually similar, Egypt in the hands of the Muslim brotherhood and well on way to becoming a extreme Muslim state, Turkey is forcing its Ataturk secular leaders out of the frame, just as Erdogan’s plan starts to materialize, no more secular Turkey – and no more friends with infidels, no matter how much they helped in the past.

The official reason for the riots outside the Israeli embassy in Cairo in the past week has been the unintended killing of 3 Egyptian soldiers on the Israeli-Egyptian boarder when a full terror offensive took place at the area, the Israeli army shot back at the sources of fire and because of the proximity to the Egyptian army post the soldiers were killed. It is evident that the unfortunate death of those soldiers is not the reason for the riot, mainly because the riots near the embassy started as soon as the Muslim brotherhood understood it was on way to take control of Egypt.

That leaves us with the very simple and clear notion that Egypt is moving towards renewed extremism and wants to move out of its peace agreements with Israel, fantastically synched with Turkey’s aggressive measures aimed towards Israel, in a response to the unlawful flotilla of 15 months ago.

Jew hate is probably the best political target in the middle east, Erdogan is already fast becoming a pan Arab leader just for his hormonal challenging of Israel’s control over its waters, the Muslim brotherhood needs just that, a front man who follows the same rules and obeys the same laws and that could become a exterior leader to Egypt’s fanatics while the country itself will maintain a moderate look to the west.

And Israel? this country could have done more to avoid this situation, better use of diplomacy, which is in the hands of foreign minister Liberman, who is (mostly) secular but over paranoid and borderline racist “Israel our home” leader, some forward thinking could have either dodged the situation with Turkey or expose Ardogan to the west as a warmonger and thug, and the same kind of thinking could have created a healthier relationship with Egypt. However Israel is itself in a process of regression, which makes it even worst when you consider the outcome of these events. 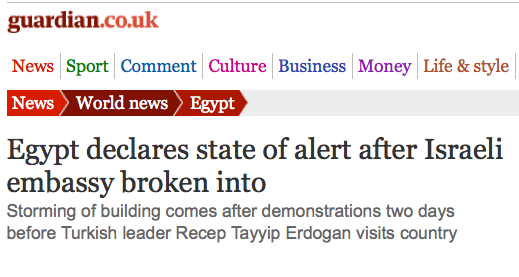