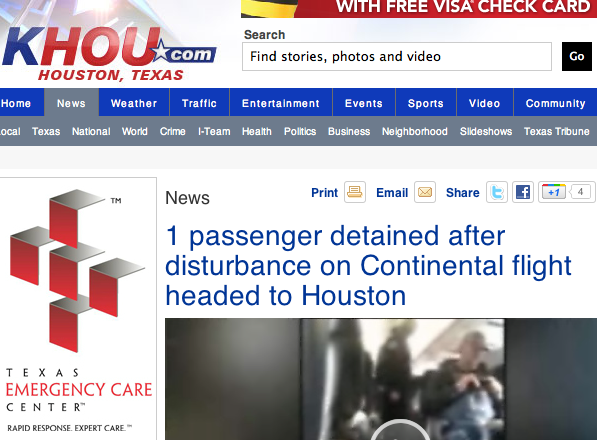 This piece of fresh news makes it so easy to see how religions are flawed, it only take a simple cry of a believer to freak out everyone around him, some will say that this is exclusive to Islam however it can very easily work in other religions as well.

Passangers of continental flight 1113 were startled when two mid eastern passengers, who wanted to sit together, began to behave aggressively, the situation escalated when one lit up an “electronic” cigarette, and when asked to put that out he started screaming “Alla is great”, at that moment almost everyone on board felt their lives were in danger. It has been reported that many of the passengers assisted the air crew in restraining the young man, he was taken by police after the plane landed.

Now for the best part, the hidden meaning and the way mainstream media plays down the religious part. The hidden meaning is clear, once people on board knew this guy was a believing muslim, who had exploded into calling god because he was not allowed to lit a cigarette on board an airborne plane, they all made a very simple calculation and realized that he might try and kill himself and everyone who is with him.

The media covering the “God is Great” part is simple, browse over to USA Today news and read the story, there is no mention of this, however you can see that readers comment on it –