Nigeria is Zeroing in on Christians, seems a little harsh for a title no?, will not today.

The last work of pure evil is coming from a group called “boko haram” which is very much against the central government of Nigeria, and uses the same old tactics being used and implemented over the middle east for some time now, the indiscriminate slaughter of citizens of all ages to destabilize the power of the government and make life a living hell for everyone, with the exception of those defined as correctly religious.

The goal, also perfectly synched with all mid east terror groups, is a Sharia law country in which Islam calls the shots, even though Nigeria is a pretty big country with a mostly Christian based north, a Sharia law in Nigeria means very bad news to the Nigerian Christians – if it will happen.

Among the killing and slaughter of police officers and other people this group also remember to execute some of the real targets of radical Islamists, and makes sure to set fire to churches whenever possible, and to kill Christians as a bonus.

All of this should not surprise us, in a world that is blindly celebrating a so called “Arab Spring” which gives birth to new forms of totalitarianism many turn a blind eye and ear to the voices coming from Libya calling for Sharia law in the new country (combined with deadly violence in the name of Islam), the results of the elections in Tunisia which is turning into an Islamist radical country and the recent attacks on Christians and churches in Kenya and you get a clear picture. Small groups of local Islamic radicals are moving in on their targets, elimination of Christians from their environment. 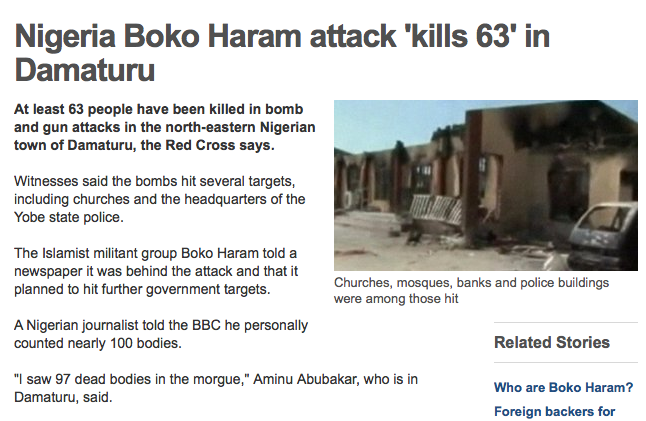