Looks like there is a new industry in Egypt, and it is kidnapping, it started with tourists and foreign workers and now has developed into a full blown “everyone included” kind of a deal, targeting especially children of upper class families.

This is yet another indication of the poor state Egypt is in since the begging of the “revolution” and the euphoria that followed it, the country is on a spiraling escalation of violence and crime, mixed in with fundamental religious statements that cry out for anything from a war on Israel to the banning of women touching fruits in markets.

It seems that the Mubarack era, as oppressive as it was, was holding back a lot of the criminality that was hiding in some layers of Egyptian society, now that this barrier is gone it looks like its a free day for all those who wish to indulge in criminal activity. The authorities have already shown themselves to be doing little to stop or prevent much serious things than these, for example of the Egypt soccer riot of this week that ended with scores of dead.

How symbolic it is that the grandchildren of the murdered former president of Egypt Sadat have been kidnapped, their grandfather was a prominent solider in Egypt’s army and later made president, only to be murdered by those who are now in power  – the Muslim brotherhood, and now the lives of his grandchildren are at risk because of how those who killed him run the country, sad. 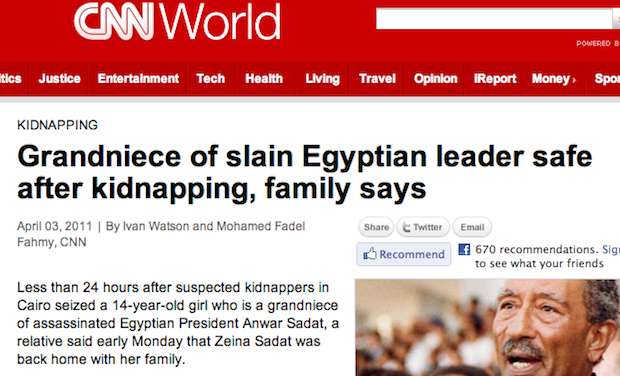