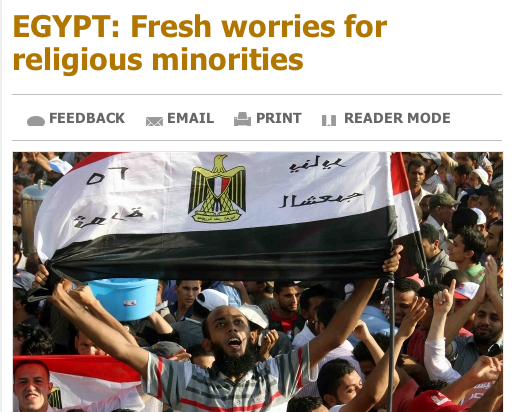 Egypt’s treatment of its minorities seems to be going from bad to worst, or even to the brink of a humanitarian crisis. After that much discussed constitution the country now moves to implement many of the Islamic principles some of its Islamic population passionately want to see as the country’s rule and law.

It is already clear that Christians and Jews in Egypt are seen as something of a nuisance, now the education minister turns to the Bahai population of the country with a new idea, the children of those who believe in the Bahai faith will be excluded from schools.

As the new rules state that the country will respect only the “Abrahamic” religions (apparently those are Judaism, Christianity and Islam) and since Bahai is not on this exclusive list the children of this faith will find themselves out of the gates of elementary eduction establishments.

This is clearly another move towards that never ending goal of the Brotherhood, to enforce Sharia on the country and establish the beginning of the Caliphate, judging by the relative silence following the persecution of Christian Copts and Jews in the last 2 years in Egypt it looks like this step is going to pass without much trouble from the countries of the world.