“Oh here it comes” says to himself the fundamentalist atheist in his armchair, as he reads todays “Nation Post” full comment by Raymond J. de Souza, here come all those who preferred to not confront the live Hitchens but the dead one. Now our line stands defenseless, or at the very least badly lacking its main protector.

But the attack is not on our lines, oh no, it is personal, very personal indeed. To read (and re-read) those words written by a love-filled minister, one who should believe in turning the other cheek, could shake the foundation of those who think that God is love and those who worship him/her/it are love too, well, disappointment.

So father de Souza goes on to promise us, with conviction, that the afterlife is a sure thing, and not only this, he also knows some individuals are well on that far away land form whose bourn no traveler returns. Oh father! with such insight what on earth are you doing spitting on Mr. Hitchens fresh grave?

And here comes the twist, those of you who really followed Christopher Hitchens know how passionate he was about the freedom of thought, and the freedom of speech, how strongly he advocated the right and need for a different voice to be heard. So here is the full text from the National Post, because we need to keep our eyes and ears open, as well as our brains and minds. If there is something I am almost sure Hitchens would have liked is that you listen carefully to later be able to destroy it, and if you can not, well, maybe it will just change your mind. Lets see.

This one is for you Hitchens. 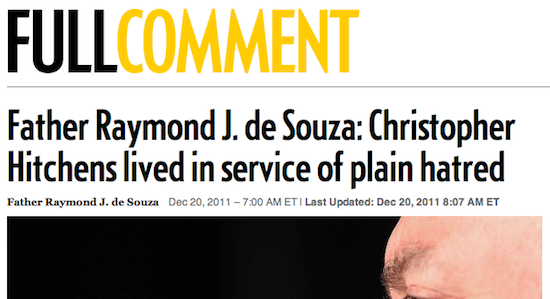 Christopher Hitchens is dead. By his own lights, he is utterly defunct, decomposing more rapidly than yesterday’s newspaper. I take a different view, and do sincerely pray for a merciful judgment. In the mean time, I trust that his soul, even now, is chagrined with the extravagant evasions that marked his death. My colleagues were enthusiastic contributors. Our editorial board praised his “courage” as a journalist and deemed him the “greatest columnist and essayist in the English-speaking world.” The estimable David Frum wrote that, “If moral clarity means hating cruelty and oppression, then Christopher Hitchens was above all things a man of moral clarity.”

Clarity he had. But hating cruelty? He was himself both hateful and cruel. Upon Bob Hope’s death, Hitchens wrote that he was a “fool, and nearly a clown.” When Ronald Reagan died, Hitchens called him a “stupid lizard,” “dumb as a stump” and “an obvious phony and loon.” On Mother Teresa: “The woman was a fanatic and a fundamentalist and a fraud, and millions of people are much worse off because of her life, and it’s a shame there is no hell for your bitch to go to.”

The sadness is that there is a hell for Hitch to go to. He was granted a long farewell, with the opportunity for reconsiderations and reconciliations with those he hated and those he hurt. He declined to take advantage of it. Mother Teresa is fine, and no doubt prays for her enemies, including that Hitchens would be delivered both from hell and the nihilistic oblivion, which he thought awaited him.

“He was a virtuoso hater and his hatreds were redeemed, when they had to be, by the sheer relish with which they were expressed,” wrote Michael Ignatieff upon his death.

For many of Hitchens’ fellow journalists, the virtuosity of his brilliant writing and bracing conversation earned him a pass on the hatred. But hatred it remained. His commercial genius was to harbour hatreds sufficiently vast and varied that a lucrative constituency could be found to relish all of them.

In the first of his elegant essays about the ravages of his terminal cancer, he wrote about the consequences of his abbreviated future: “Will I really not live to see my children married? To read — if not indeed write — the obituaries of elderly villains like Henry Kissinger and Joseph Ratzinger?” The Scriptures in which Hitchens did not believe say that love is stronger than death. Maybe he thought hatred was, too.

He desired to live that he might trash the freshly dead. It was habitual for him, most intensely manifest when he accepted an astonishingly ill-conceived invitation from ABC to provide commentary for Mother Teresa’s funeral broadcast, using the occasion to heap abuse upon her as she was being laid to rest. It was a vile, vicious and typical performance. Is it truly possible that the “relish” with which he did, so redeemed it in the eyes of his literary friends?

As for his courage, I find less there than others do. He faced his final illness with real fortitude. He was fearless — and peerless — in debate. But I think it more apt to explain the idiosyncratic incoherence of his views by the gravitational pull of shifting opinions. He was a Trotskyite as a young man in Europe in the aftermath of 1968. He abandoned socialism — just as the entire world was burying it amid the collapsing ruins of communism. After 9/11, he took up the cudgels against Islamofascism, as he was pleased to call it. He supposedly broke with the left by endorsing the Iraq War — back when Ignatieff, John Kerry and Hillary Clinton were endorsing it. And in his final act, he was toasted by secular elites the world over for his fundamentalist atheism.

Professionally, only his campaign against the mendacity of the Clintons was courageous. That cost him some of his friends in the Washington salons, where he so grandly presided. Almost every gushing remembrance mentioned his legendary drinking and dinner-table rhetoric. That he could write better drunk than the rest of us sober is impressive in its own way, but the sheer awe of his drinking prowess is puzzling. Perhaps if I had gone drinking with him, I too would have been bewitched. Or perhaps not, given that I spend much of my time around university students, so I am rather less impressed than most adults by ostentatious alcoholic excess.

“Mercifully, too, I now can’t summon the memory of how I felt during those lacerating days and nights,” Hitchens wrote for the January 2012 issue of Vanity Fair, recalling the horrors of cancer and its treatment. Yet the lacerations inflicted by his writing do remain, and are remembered. The remedy is mercy. Hitchens was disinclined to show it, let alone ask for it. Yet the hope remains that he knows it now.

Here is the link to this article.