Some people seem to think that if they put God in the drivers seat everything will just work out great. You can also assume that putting a fictional and non responsive deity in charge would end in disaster, even those who are hard line believers would not step into their car and say “I am letting God decide when to break, I am in his hands now”, because they realize no one will hit the breaks and they would just slam into a wall.

However it is not the same when thanking God for anything, giving credit it seems is the one thing God is actually useful for, instead of saying how lucky you got to win the lottery or how well trained you have become to score in the Superbowl you just hand the credit over to God (or Jesus) in sign of your true modesty and humbleness.

But with babies it works differently, first because you might have not wished for a child and when the news breaks you need to put the responsibility on someone, or you are just blindly walking through life and irresponsibly carrying other people with you, and you do that in the name of God.

The news tell us that Michelle Duggar, mother of 19 children, and 45 years old, is now expecting yet another baby, “I was not thinking that god will give us another one…” she is quoted saying, well, its not god that gave you the baby, its your husband and your utter lack of awareness. Lets just start from the beginning, we humans, like all mammals, need time to get our babies to a stage in which they can start to take care of themselves, it usually take 3 years for a young child to to be able to walk and even ran properly.

In ancient times mothers would carry their babies until an even later age, also breastfeeding them longer, meaning that the time a human mother had to invest in a baby was considerably long, which restricted that number of babies a human mother would produce. So if any creator would have any target number of children for a human mother it would be around 4 or maybe 5, not much more, because humans also died at the age of 30-40, meaning that they would have only two decades of reproductive ability.

Even with these numbers we need to remember the hardship of ancient lives, the disease, the lack of proper medicine and treatment, no understanding of inflammations and how to fight them, wild animals, natural disasters etc.

But science came along, increase the average life span, invented medical treatments that caused decreased rates of death at delivery, and it was suddenly possible to have much more babies than before. It was not God that came along and made changes, but humans trying to better life. It was humans blocking the creator plan to kill as much as 30% of women who delivered babies.

It is also this modern, men made, health and technological improvements that make sure that Ms. Duggar has all her babies alive and well, because 1,000 years ago she might have looked at a much smaller family. So it is not god she needs to thank, but modern science, because that is what enabled her to have 19 kids and be pregnant at 45, if God is doing anything here is to trying to kill her at birth, or do the same to her baby. 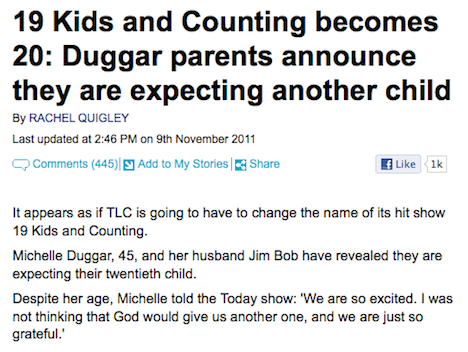